For our final project of the year we worked on a variation of Circle Painting.
I first read about Circle Painting on Barbara's blog here. I followed that idea, but added a variation of dimension to our piece. Since our school blocks YouTube I found some other sites with examples of circle painting to share with my group of 4th graders to give them the general idea. Kids worked in teams of 4, each with one color of paint, at separate tables. Each table had a different set of colors. 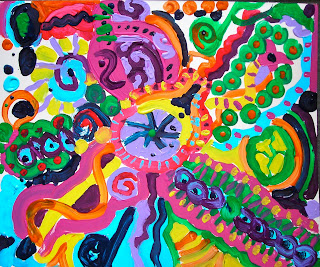 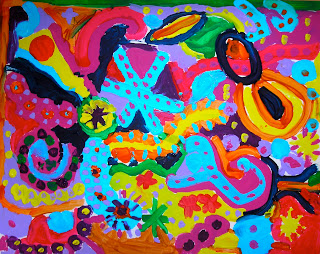 One child started with a circle or circle pattern in the center of the board. The next child added on with a new color. Once everyone had added one color they could all jump in and paint at the same time growing from the center outward. 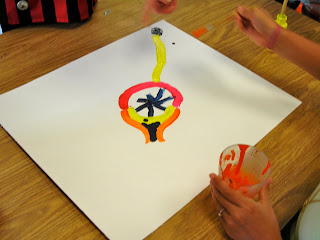 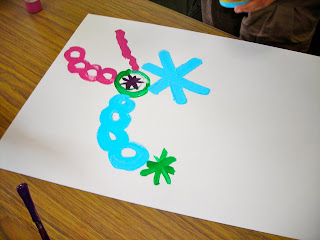 I asked them to plan, thinking of color, line, design and general balance of the piece, however, I found that the planning conversation just happened naturally. I loved when I overheard one of the boys saying, "Let's plan this smart!" and then went on with his rather elaborate suggestion. 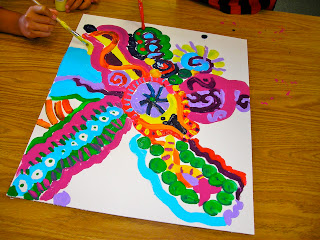 Children rotated their positions at the table so that their color repeated in different areas. After awhile, I had kids change tables so that they were working on a different piece of art with their new set of colors. It was fun to see them go back to their previous table to see how other kids had added to "their" painting. The teamwork began with the original 4 kids, but then grew to include the others who worked on the same piece. Such a great opportunity to demonstrate cooperation!!!!!! 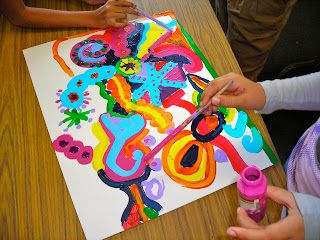 Before the students started this part of the painting, they cut and painted a 2" tube which they will be gluing onto the finished paintings tomorrow when they are dry. I think that this addition of dimension will add to the basic circle painting. We'll see!! I'll share when it is done. 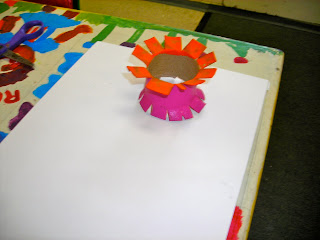 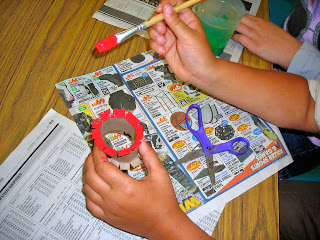