My very first job, as a kid, was wrapping gifts at the local department store during Winter Vacation. That store was called J.W. Robinson and it is no longer in business.

I didn't know it until recently, but the Robinson's home and gardens is open for tours.
It was built in 1911, one of the first of its kind in Beverly Hills, Ca.  Parts of the house are included in the tour, but the main attraction is definitely the garden, or gardens.

A friend and I recently toured the grounds and I thought I would share -- kind of like a mini-field trip for you all:))


All in all, it was a lovely California day!!! These were taken about a month ago. Now we are beginning to feel the heat of summer. I walked down to the Farmer's Market this morning to get the first of our Blenheim Royal Apricots. By this week-end, when they are fully ripe I'll be starting my yearly apricot jam fest in the kitchen!! These apricots are only in season for 3 weeks, so you know what I'll be doing for awhile!!!
Posted by Christie - Fine Lines at 9:51 AM 1 comment:

As art teachers we often have very little time to transition between classes, so clean-up the kids can do themselves is a blessing!! This year, whenever we were using paint or glue, I put out a dampened sponge at each table. Even the youngest of students (kindergarten) delighted in using the sponge to help out. The only warning I gave them was, "Please don't dip the sponge in the dirty paint water -- it already has enough water in it!" At the end of the day I would give all the sponges a quick rinse and they were ready to go for next time. 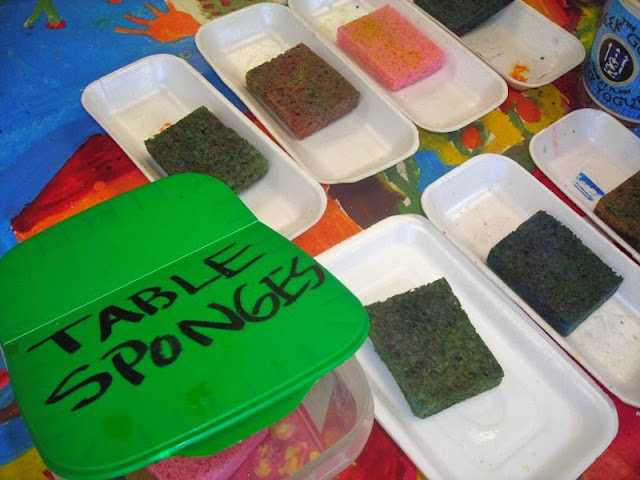 When we were doing collages or anything that involved cut paper, I put a large size Cool Whip-type container in the center of each work area as the "scrap pile." At the end of each class, a volunteer from the table would empty the scrap bowl into our classroom recycle bin while others at the table gave the floor a quick pick up. Now, that was easy clean up! 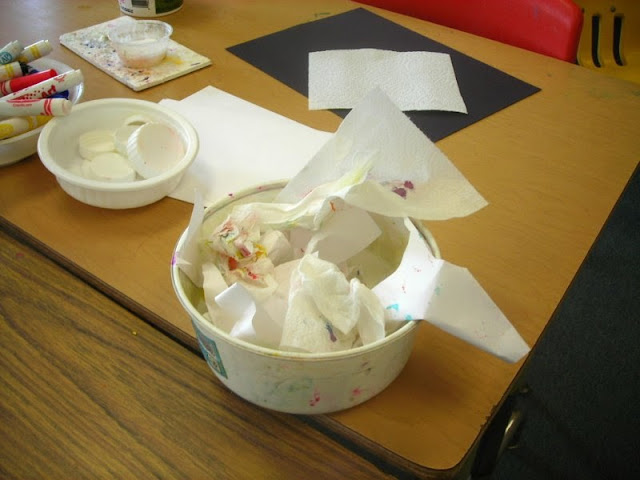 Hope everyone is enjoying summer vacation!!!!!!!
Posted by Christie - Fine Lines at 11:47 AM 5 comments:

Here it is, the last day of school before Summer and I am getting ready for the start of school!!  I put up bulletin boards of painted paper flowers that the kindergarteners collaged in mural form to greet kids when school starts in August. We followed the procedure posted here. 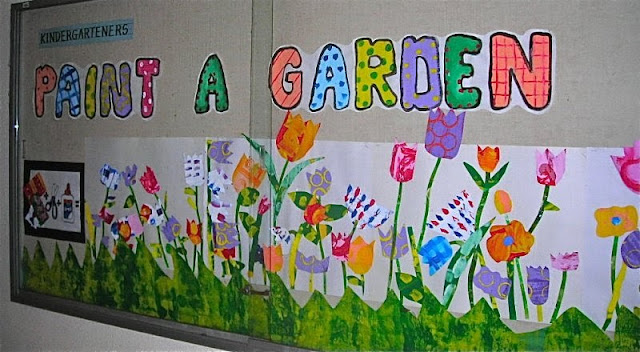 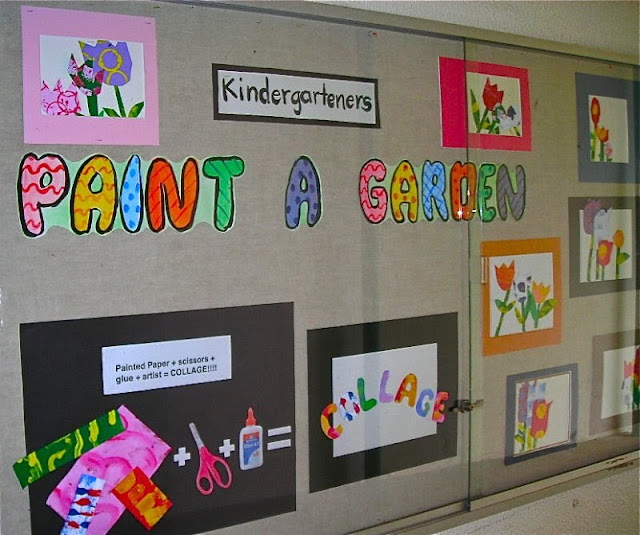 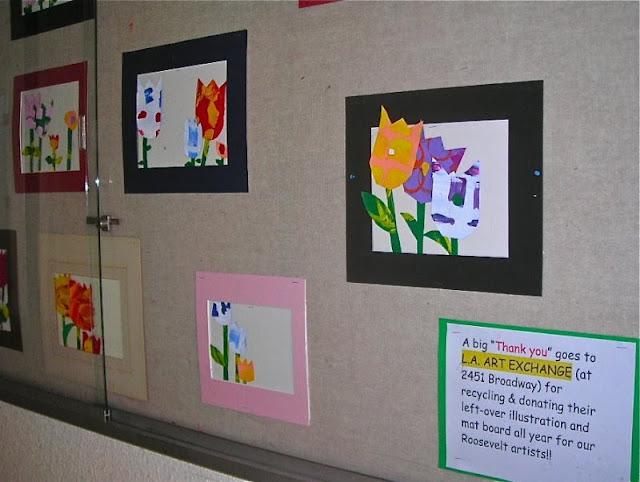 Then I cleaned out the classroom, turned in my keys and came home and signed up for Bloglovin' so I'll be able to follow all my blogger friends when Google Reader ends on July 1. I sure hope I did everything right -- it seems to be working so far and it was pretty easy to do!! You can see the widget on my sidebar.

Lots of Dots and Jasper Johns


Kindergarteners just completed their final work for the year and did a great job, I think!! 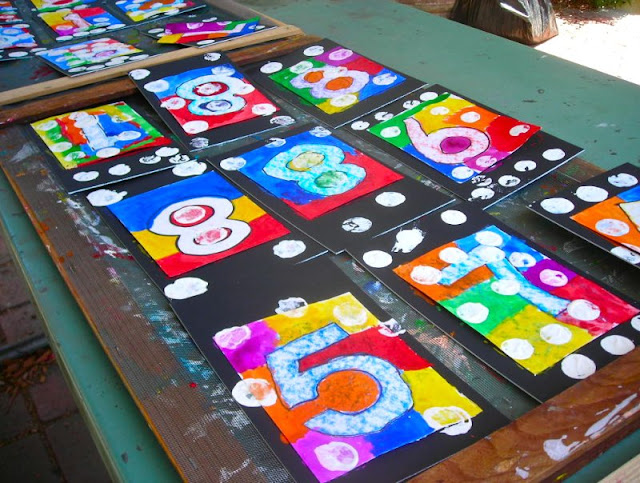 We started with a little "Guess the Number" game where the kids had to ask me "yes" or "no" questions like, "Is it greater than 4?" or "Is it less than 6?" until they had eliminated all but the mystery number hidden in my pocket. With some classes I actually removed the pink numbers from the board (they were held up with magnets) as the kids asked their questions, until only the one number was left. 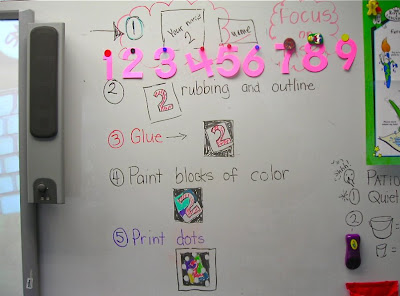 Next we looked at some Jasper Johns' work using numbers. These kids had had some experience with Johns earlier in the year in their regular classrooms. 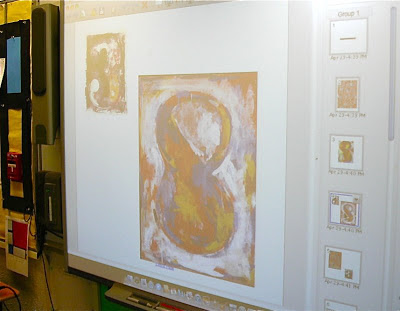 I had pre-cut the die-cut numbers and marked the back with an "X" to avoid backwards numbers. I modeled how to do a rubbing, although most of these kids had done leaf rubbings earlier in the year. After rubbing they outlined the number with a Sharpie and glued it to the black board background. 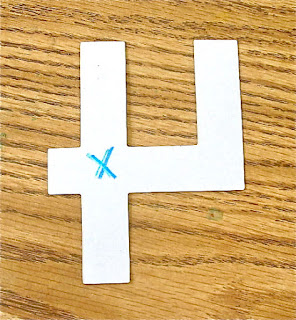 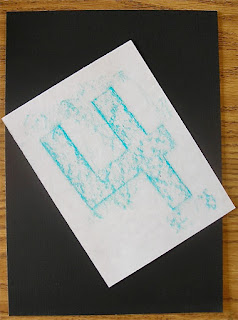 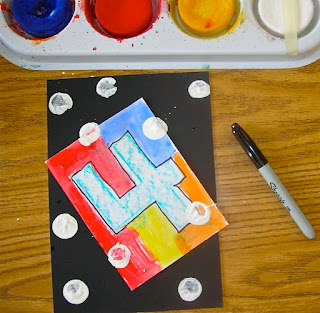 The final step was to stamp or print circles/dots in any way they liked. We used donated champagne corks for printing. They were great because one end is like a handle. 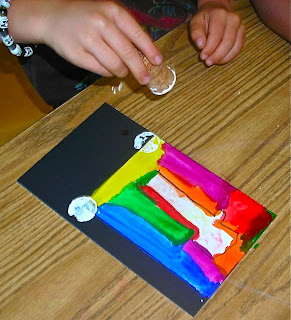 This little guy/or girl had quite a sense of symmetry!! 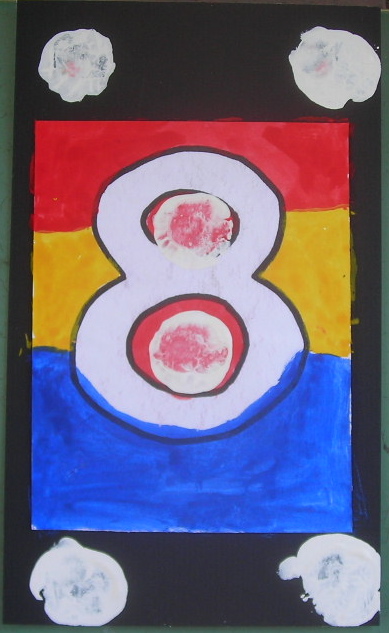 We talked about how we could use this art to talk about math. For example, this first arrangement shows "76" ... 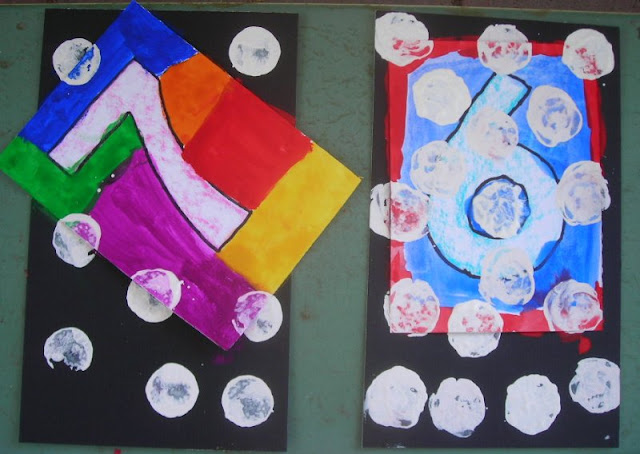 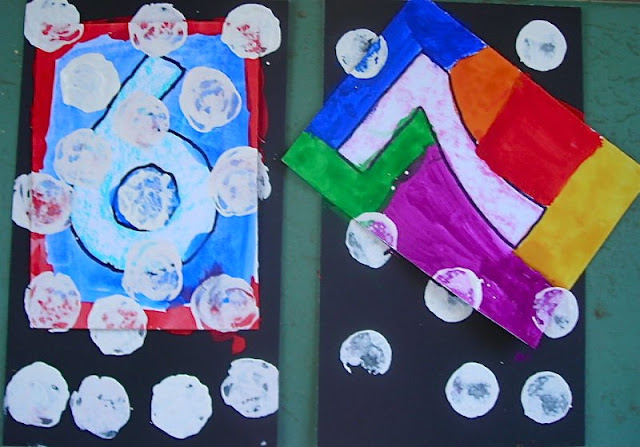 This, of course, led to the discussion of "What if we used 3 numbers?...or 4 numbers?!!!" As you can imagine, the possibilities for integrating other mathematical skills are endless!!
Posted by Christie - Fine Lines at 3:54 PM 5 comments: