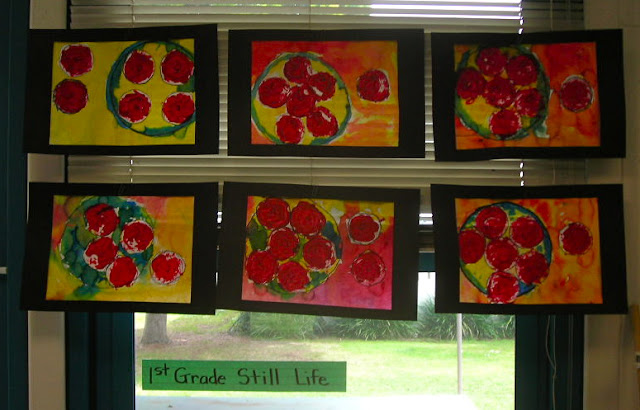 I found a few more photos of our apples to share. I love looking at these and will be sorry when I have to give them back to our students!!
Posted by Christie - Fine Lines at 3:05 PM 4 comments:

From Art to Story

As 1st graders worked on their Calder-like moving birds this week, I wanted a related story that I could read to them as they finished. Nothing came to mind, so I started thinking about making my sample bird into a story patterned a bit after Cindy Ward's, Cookie's Week and Eric Carle's, The Hungry Caterpillar.
In my version, the bird (named Petey after a parakeet I had when I was 6 years old) starts his day indoors doing various things around the house, but later notices the open door and you can imagine what happens next.
My childhood parakeet actually did escape through an open door. We tried to lure him back by putting the cage with his partner in it out in the back yard and, surprisingly, an entirely new parakeet flew to the cage. She definitely wanted to stay, so we welcomed her in and called her Emma. She actually was smarter, tamer and cuter than the original!! True story!!!

Our Spring Break starts next week, so I thought this might be a fun activity to do with parents at home. I put a few sample pages in our hallway bulletin board space in hopes that some families would like the idea and give it a try:)
I tried making a copy of 2 of my sample pages as a Google doc to see if you can access. We'll see if it works. Click HERE>
Posted by Christie - Fine Lines at 10:33 PM No comments:

I have definitely been on a "Calder kick" this year after seeing a great exhibition last summer in Newport Beach. This week, after seeing a brief clip of a video on Discovery Education explaining how Calder (at age 8) made his first animals as a gift for his parents, first graders will be creating their own kinetic (moving) bird sculpture.
My sample: 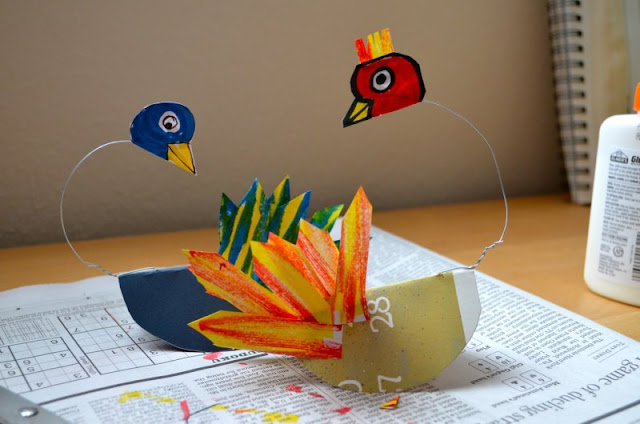 
I'll take photos of the kids at work so you can see if this all works!!
Posted by Christie - Fine Lines at 3:24 PM 10 comments:

This week we broke out the liquid watercolors and finished our apple still life paintings that I wrote about a few weeks ago. Students outlined their apples and plate with black to keep the watercolors from running all over the place. One little guy said, "It's like we are building a wall of wax."
"Exactly!!" I replied.
We painted the plate first using yellow and blue. Then I removed the blue from the tables and replaced it with red for the a different colored background. It always amazes me how kids oooh and ahh when the yellow and blue mix to form green:) 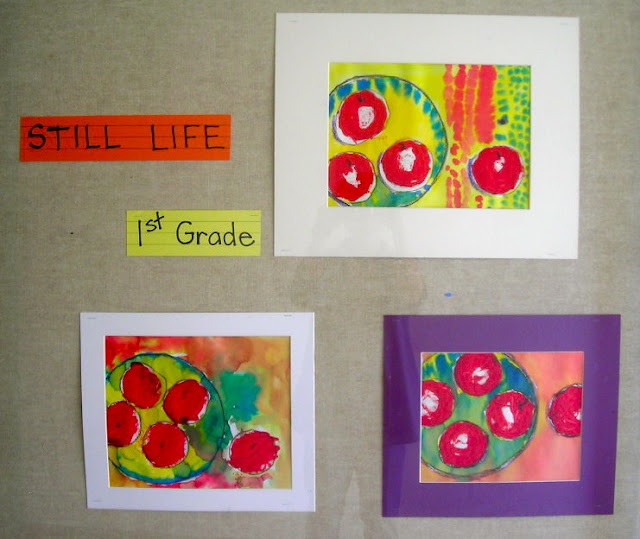 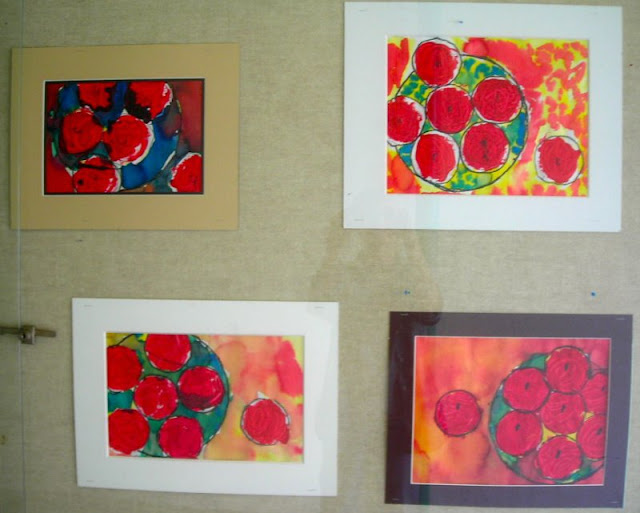 I grabbed a few random examples for this bulletin board, but I think I would like any one of the kids' works framed and hanging in my house!!!!!!

This week we put the final touches on our lupine paintings by roughly outlining blossoms with marker. You can almost smell the blossoms in the Art Room:)) The lesson for this is posted earlier in the month HERE. It would be a good one for Kindergarten, too:) 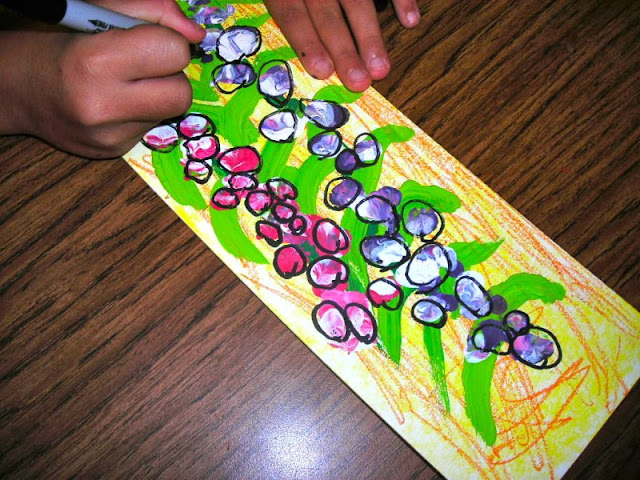 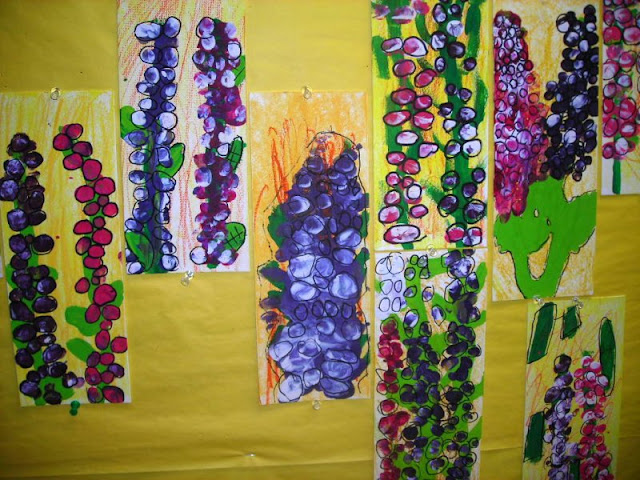 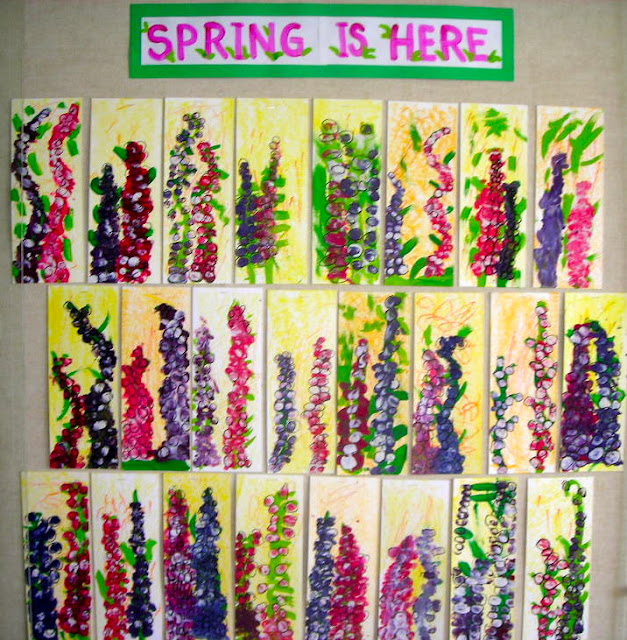 Camera Practice at the LA Marathon 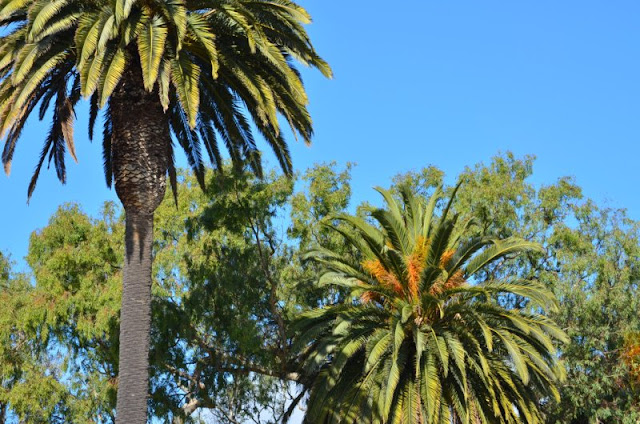 I know this has little to do with art education, but I rolled out of bed this morning just in time to grab the camera and walk over to see the elite winners of the LA Marathon approach the finish line and had to share:) These shots are a few blocks before the finish. We had rain all day yesterday, so it was a surprise to see this glorious day today!! 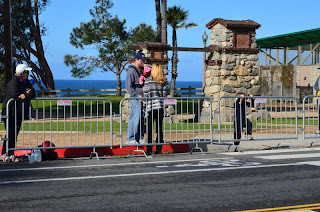 I rarely use a lesson I find on-line without tweaking it a bit, but I recently found two still life lessons that I absolutely LOVE just the way they are. One is a bird's eye view of apples modeled after Matisse, which we are doing this week. It was done at Prospect School on Artsonia (here). I think the only thing we did differently was to "paint" the apples with a spoon instead of a brush. 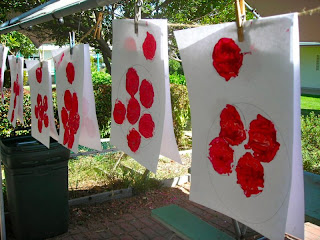 Today I began my lesson playing a game with the class. I hid an apple in my "mystery box" and kids tried to guess what was in the box by asking "yes" or "no" questions. Then we moved the Smartboard to take a look at apple still life paintings by Matisse, Cezanne and Renoir. The final slide showed this bird's eye still life of a plate of apples that the student's used as the visual for their own work. 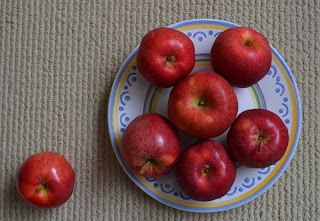 First, they traced around a foam plate to make their plate. We used the plastic lids to our paint portion cups to trace apples on the plate and to the side of the plate. 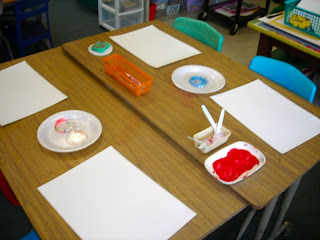 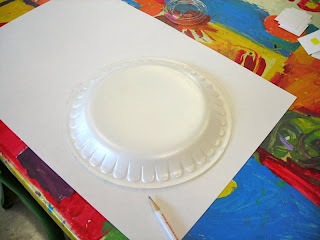 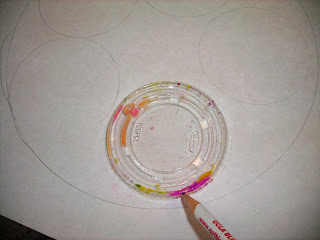 Instead of using paintbrushes, I showed the students how we can use other tools to apply tempera paint -- in this case, the back of a plastic spoon. I asked that they swirl the spoon in a circular motion, trying to leave part of each apple white. We let these dry. As you can see above, we had an overflow of drying art and I hung some out in the patio (in the strong wind!!!) to dry. We had a little time at the end of class for me to read the kids an "apple" story. What a great day!! 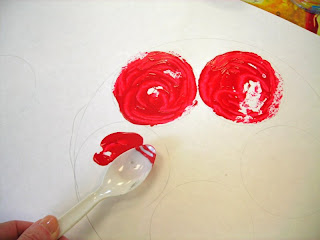 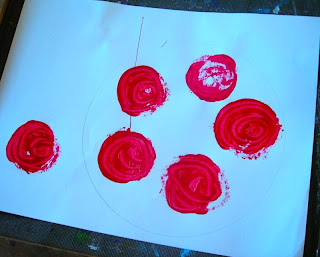 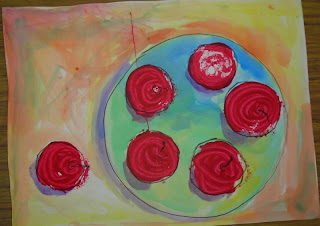 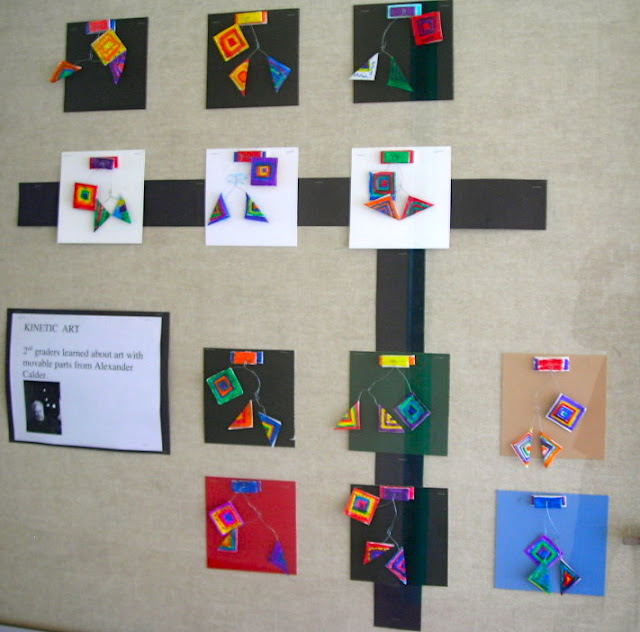 I FINALLY got some of our 2nd graders' kinetic art posted in the hallway. Two teachers walking by saw a resemblance between the hanging pieces and jewelry. I hadn't noticed it, but they were absolutely right!!! I have to say, it was a bit of a challenge to mount these pieces behind glass that doesn't allow for much depth as the blowing wind threatened to unhook the wires and send the pieces flying down the hall!! The lesson for this was last week's post:) Have a good week!
Posted by Christie - Fine Lines at 2:54 PM 1 comment: