I just got back from Montana and loaded all my photos onto my laptop to "re-live" the days. It seems I was focused quite a bit on critters: 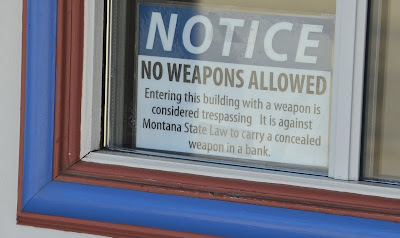 This was posted in the window of a local bank. I have never seen a sign like this!!!

I can't believe how many photos I took. It was great practice with my new camera. When I get a bit more time I will post the photos I took thinking of school. One day I tried to get a lot of "nature textures" which I'd like students to interpret in different ways, perhaps with wild colors instead of the natural colors. I haven't quite thought it out yet, but I know I will use them. Here is a sample: 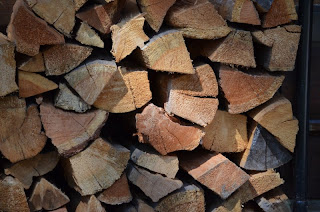 Another day I went out looking for examples of "line" and "repetition" and got some great farm scenes. 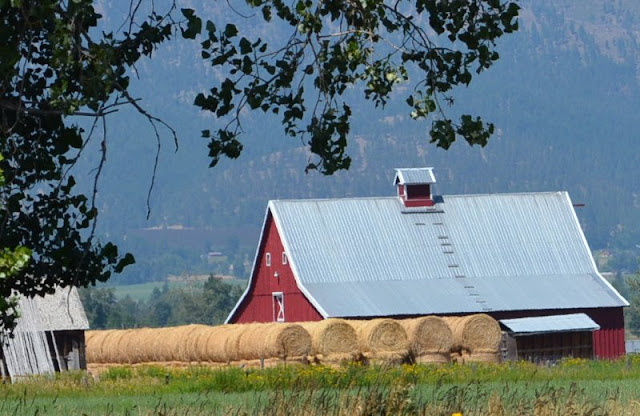 More later....   Now, I have to go wash a suitcase of clothes and get organized. We don't start school until near the end of August, but I am feeling the need to start thinking about planning. Have a good week!!
Posted by Christie - Fine Lines at 3:46 PM 5 comments:

Summer seems to be whizzing by and I still have a stack of books (these are just a few) lined up to read. Nothing like a cup of tea, a gentle breeze and a good book!! The cup is a new acquisition from Anthropologie. I am beginning to feel the tug of a new school year starting soon, but am not quite ready to let go of summer yet:) 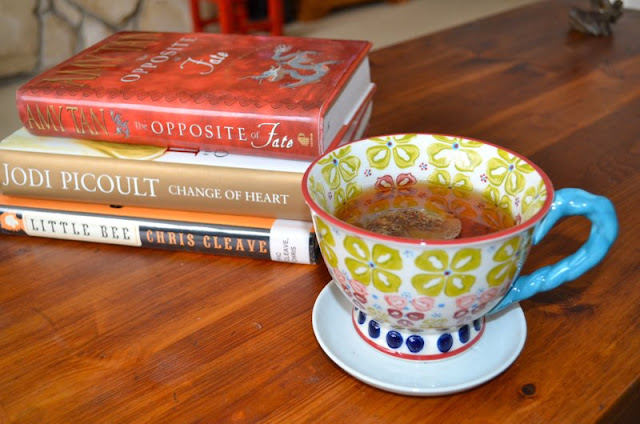 My favorite apricots (Blenheim) arrived at our Farmers' Market last week and my kitchen has been in a flurry ever since. I invited a good friend over this year to join in this EASY microwave jam session. The recipe (which makes 2 half-pint jars) is HERE. 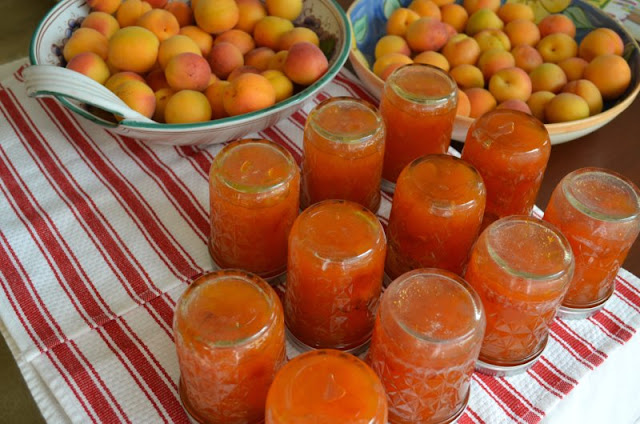 I decided to get a bit more creative with my tops this year. In addition to fabric circles tied with baker's twine, I also went down to Sur La Table and got some fancy cupcake papers to turn up-side down and tie onto some of the jars. They had so many GREAT choices it was hard to decide which ones to get. I'm getting so into this now that I think I'll paint or color some apricot tags to attach to the jars, too. I got a new batch of apricots this morning so it's off to the kitchen again! SUMMER IS SUCH FUN!!!!!!!! 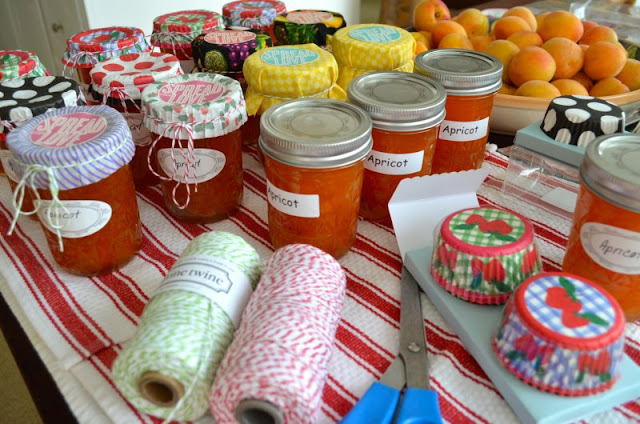 A Red, White and Blue Friend

Last week I was pondering how to replicate the art mask given to me by a friend to use as a classroom project. I had thought I would use plaster cloth like the original but try a different sort of hair. 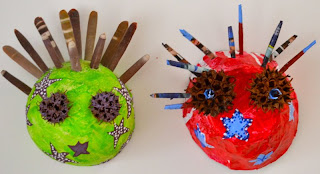 Instead of the plaster cloth, I tried a paper mache version, molding 2-3 layers of newspaper over an upside down bowl. I lined the bowl shape with foil first so I could lift it off the mold easily. When it was dry, I cut around the base to even everything. You could leave the foil on the inside for stability, but I pealed it off and that worked fine, too. Then I painted the whole "dome" with a layer of Gesso. 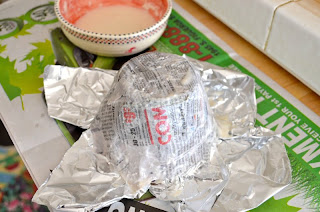 Instead of shells for the spiky hair, I rolled triangles of magazine paper to make long paper beads (like we used to make for necklaces in Crafts classes as a kid). 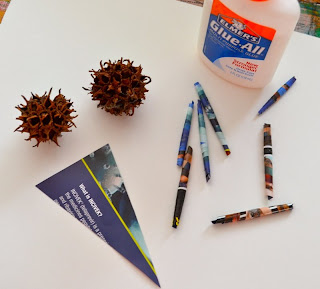 I found I actually liked the paper mache better than plaster for classroom use because it was easier to poke holes to insert the hair. I just used a push pin (you can see it on the lower right), poked a hole and then wiggled it around a little to make the hole large enough for the end of the paper bead to go through. 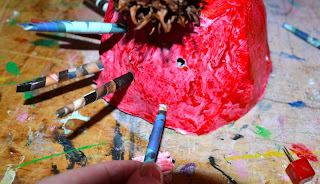 For the eyes I ended up tying a piece of black perle cotton (like sewing thread, only thicker -- but not as thick as string) criss-crossed - like you were tying a package around each seed pod. I poked holes in the mask, inserted the threads and tied them together on the inside. Then I secured the perle cotton on the inside with a piece of duct tape. You can kind of see the inside in this next photo. 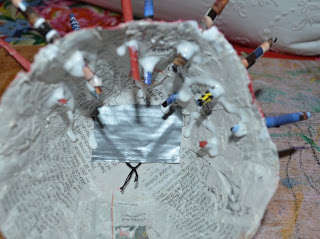 I also liberally applied glue to the inside of the hair spikes. I started using Glue All, and it probably would have worked, but then decided to take Phyl's advice (see last post comment) and used Tacky Glue, too. I also put some Tacky Glue under each seed pod eye so they wouldn't wobble around.

For the color,  I used red acrylic, watered down a bit so I'd get some texture and variation of color. When I had glued all the hair spikes and eyes, the last step was to paint the blue designs. I use acrylics for this step, too.

I love having time during the summer to try things out. To be honest, this was fun to make, BUT I don't think I'll be using it in the classroom because of all the various steps of drying time. All in all, it took 6 different days just to dry, plus the painting and bead-making steps!! GREAT for a "do at home" project with the kids, but it won't work in the classroom setting I have. It also takes a bit of patience and dexterity, so I  probably wouldn't do it with grades younger than 4th.

Speaking of 4th, HAPPY FOURTH OF JULY everyone!!! I'm now off to bake dessert for our yearly barbecue!!