I've been thinking about a post I read the other day on Phyl's site, "There's a Dragon in my Art Room" -- the one about someone blowing snow on her instead of helping her shovel snow. It reminded me of my friend who often bemoans the lack of civil greetings as she takes her morning walks in her neighborhood. It used to be that fellow walkers would smile and say,"Hello" or even stop to visit. She is finding that to be less so as years go by. I rarely address personal stuff here on the blog, but . . . 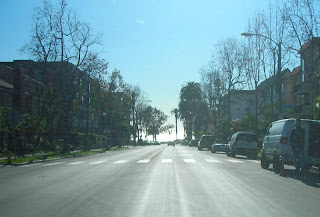 The other day I had a day off and was walking to school to teach an extra lesson for a friend. It was a gorgeous morning, sun out, birds singing and all that. Lots of people out for their morning walk. I'd say I passed 15 or 16 people. Only 2 responded to my smile with a greeting. One was a man moving a heavy sofa into a moving van, who stopped to let me go first and said, "Good Morning." Another was a lady walking her dog. Kudos to them!

Then there were the others. OK,  2 couples were walking together engrossed in conversation -- they get a pass. Two were cleaning up after their dogs, they, too, get a pass. One man looked deep in thought and probably didn't even know I was there -- I get it, I've been there, too. Then there were those who looked straight ahead and never made eye contact, even though we were the only two people on the sidewalk. Were they shy? Did they not speak English and feel self-conscious about speaking? Did they not know how to smile? Hmmmm. Not so sure about that. Then there were the rest, the ones who looked me right in the eye (remember, I was smiling, looking friendly, ready to say "good morning") and instead of acknowledging my presence, deliberately looked away without the faintest hint that they had even seen me. What is it with that??? Am  I invisible?

Good thing I was going someplace where I was greeted with enthusiasm or I may have taken all those minor "encounters" as rebuffs. I think it is too bad when, as a community, we seem to have lost some of the niceties that we used to take for granted. Don't get me wrong, I still can find those little, anonymous connections here and there, but they no longer seem to be the norm on walks around where I live. Too bad, I miss them!!
Posted by Christie - Fine Lines at 7:57 PM