With International Dot Day coming up this week I thought it might be fun for students to experiment with color and 3 different media choices. 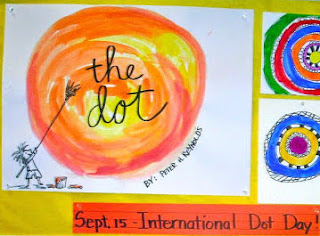 Years ago a parent gave me a large collection of buttons that I still have not exhausted, even though I have used them to start several art projects. I thought they could be the starting dot. 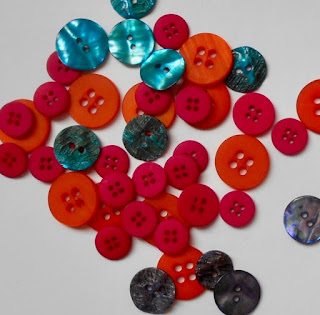 To introduce the stripes, David Shannon's A Bad Case of Stripes provides the perfect springboard to discuss color theory (whatever aspect is appropriate to the grade level, i.e. warm/cool, complementary,  primary/secondary/tertiary, tints/shades, etc.). This book also is about not letting others influence your choices and being true to yourself, also a nice trait to relate to art. 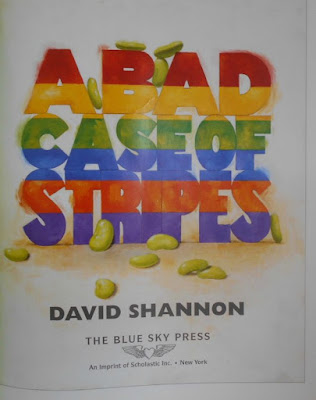 The project is for each student to start with a 6" X 6" board (or paper) with a button "dot" glued near the center. The student then makes concentric circle stripes around the dot using one of 3 media: watercolor marker painted over with clear water, water soluble wax pastels colored pencils painted over with water, or plain watercolor. Of course, you could use whatever media you like. I chose these because they allowed me to teach primary students how to use a paintbrush correctly with attention to direction of line when using it. Lessons here, and here. I like for kids to experiment to find colors they like to have next to each other. 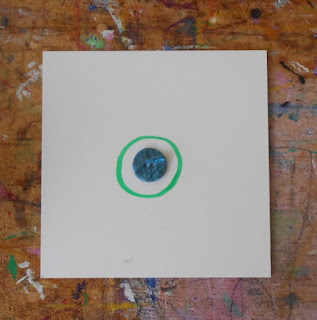 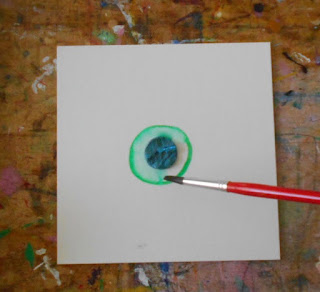 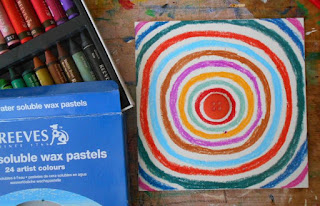 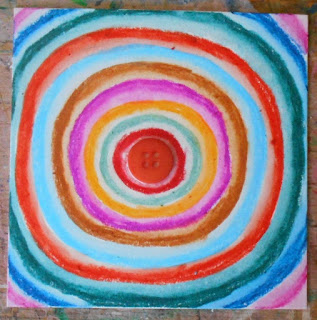 Pan Watercolors
For this version I like to require students to use the lid of
their pan to mix new colors to use. 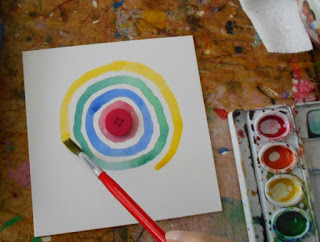 Just imagine a whole bulletin board of these displayed as a collaborative work!!!!  Happy Dot Day everyone (this Friday)!
Posted by Christie - Fine Lines at 12:41 PM 4 comments:

A short walk from school we have a wonderful park overlooking the Pacific Ocean. In that park is a bush I think of as "the polka-dot bush" just waiting to be the inspiration for a piece of art to celebrate  International Dot Day (Sept. 15, 2017). This day celebrates Peter Reynold's book, The Dot. It is kind of hard to see the blossoms in this photo, but up close they really do look like polka dots!! Also, beyond the fence in the background is the ocean. 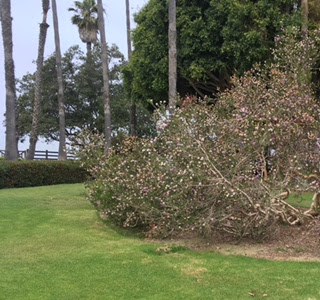 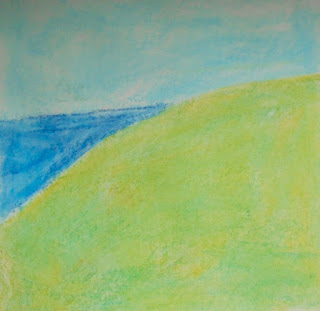 This first layer was done with pastels, softened by smearing them with a tissue. Then we start adding the trees, bushes, walkways, etc. using water soluble crayons(that can be painted over with water if desired) for everything except the front bush. That is done with cake tempera, sponge painted on ( although regular tempera or acrylics would work, too). This is a good opportunity to use art vocabulary: background, mid-ground and foreground. 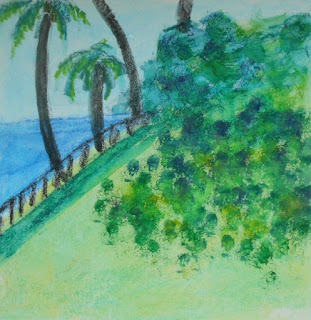 Meanwhile, the paper for the dots is painted, using warm colors and allowing the colors to run together a bit. This was also done with cake tempera. Branches are added with crayons. 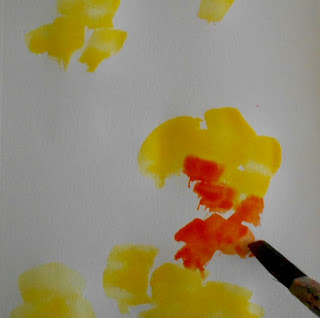 Students are asked to cut circles of different sizes, trying to include a variety of colors. They can use lids to trace the circles, but they can also cut freehand. 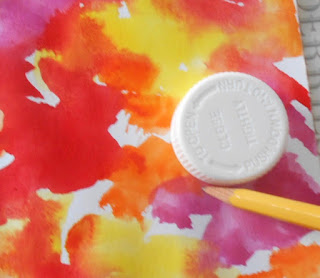 The last step is gluing on the circles to complete the polka-dot bush. 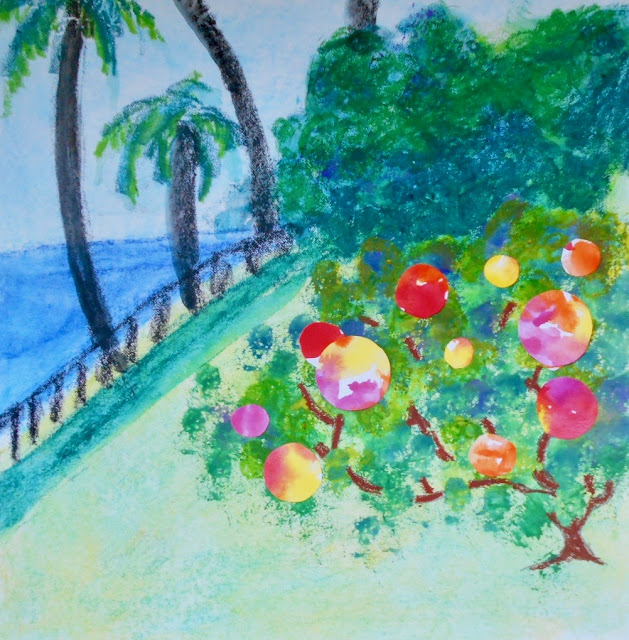 An option would be to outline the dots with a marker as seen in the example on the right below. 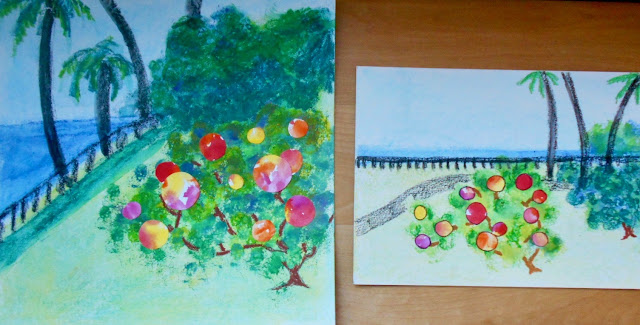 Hope everyone is off to a great new school year!!!!
Posted by Christie - Fine Lines at 3:51 PM No comments:

With summer vacation winding down, I thought I would post the final books I read this summer:

1) Actually, The Shadow Land by Elizabeth Kostova, was the first book I read this summer. I loved it!! So suspenseful!! 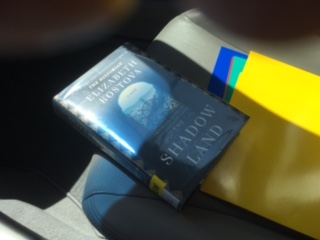 2) The Orphan Master's Son is the book my Book Group is reading   for our September meeting. It took me awhile (about 200 pages) to get into it, but I am glad I persevered. It is about North Korea, a country I didn't really know all that much about. With North Korea being reported on at the top of almost every news cycle right now, this book provides background to inform my thinking. Warning: it is pretty brutal!! 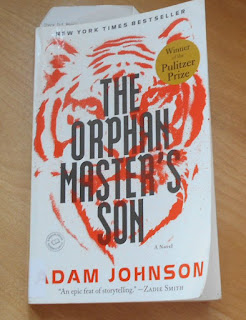 3 & 4) Our local high school has incoming 10th graders reading Kurt Vonnegut's Slaughterhouse Five this summer and I was asked to work with a former student as he read it. Talk about brutal!! It actually has parallels to The Orphan Master's Son in the way the novel is constructed, but reading them back-to-back was anything BUT light summer reading!! So I took a break and checked out David Baldacci's The Last Mile from the library. It is a follow-up to his book, Memory Man, about a detective who, due to an accident, has a photographic memory (as well as some other distinctive characteristics). A typical quick summer read! 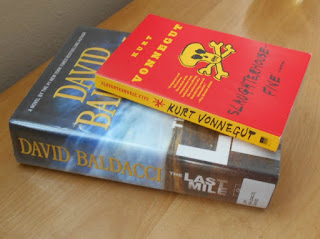 5) Right now I am reading Jennifer Egan's, A Visit from the Goon Squad. I am close to half way through it and liking it a lot! 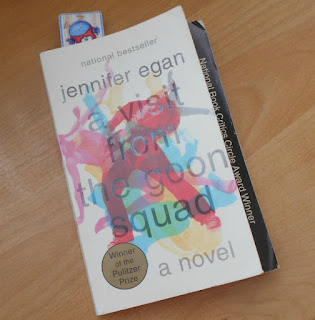 I drove by school yesterday and they were scurrying around getting ready for our August 22 opening. They painted  all the rooms and installed new windows, so you can imagine what it will be like for our teachers to unpack stored materials and get their classrooms ready - all in about a 4 day period!!

I'm not ready to think about that just yet -- think I'll go back to my book!!

Posted by Christie - Fine Lines at 9:18 AM No comments:

My friend, Hallie, has a new book out and it is a delicious suspense novel that you can read in just a couple of days. I just realized yesterday that we will back to school in a month and my stack of books to read is every bit as tall as it was at the beginning of summer!! 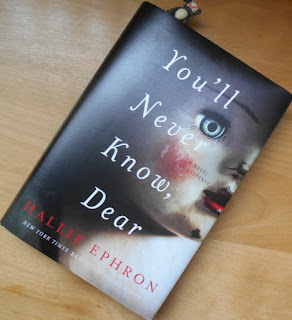 Hope everyone is having a wonderful summer:)))
Posted by Christie - Fine Lines at 10:13 AM 1 comment:

If you haven't read Christina Baker Kline's A Piece of the World, you might want to check it out from your local library and sink into it. Kline is true to history for much of this work of fiction, based on the life of Christina Olson, the subject of many Andrew Wyeth paintings, including the well known, Christina's World. It was my book club's pick, and I got the honor of leading our discussion -- what a treat!! 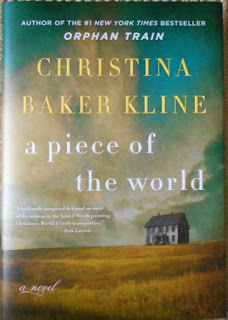 Email ThisBlogThis!Share to TwitterShare to FacebookShare to Pinterest
Labels: Connection to Literacy, Extras

Our last project of the year was this little camouflage abstract. 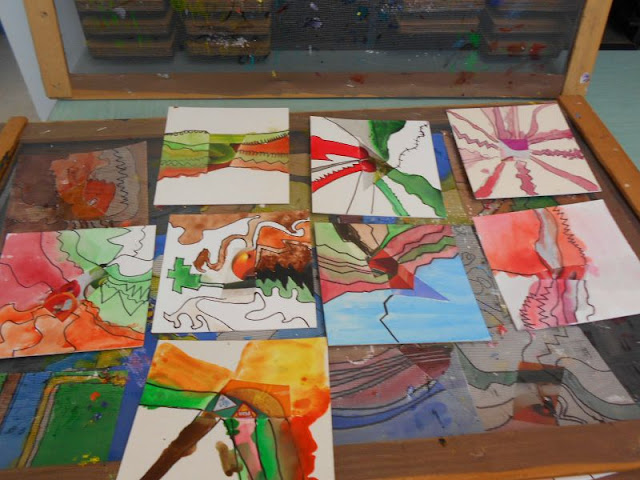 I say camouflage because each little painting started with a cut-out from a cereal box or catalogue that was glued in the center of the 6" square illustration board. I had a lot of precut recycled cut-outs so kids had quite an assortment to choose from. I tried to have some with several colors and some with only 2 or 3 for kids who wanted something easier. 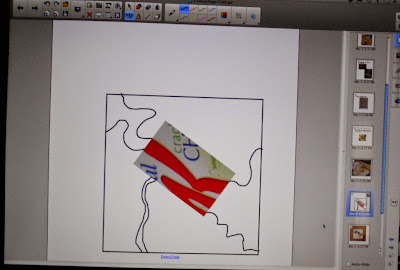 Then, using Sharpie pens, the kids extended lines from the cut-out to the edge of the board wherever two colors met. You can see what I mean in the above photo. Where the red changes to white, that is the start of one Sharpie line. Kids just moved their finger around the edge of the cut-out, looking for where one color met another.
I also made the rule that one Sharpie line could not cross another. 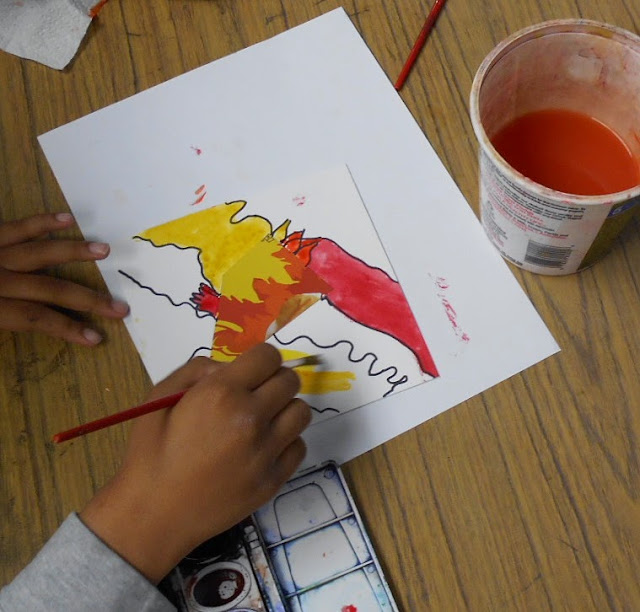 Then students used water color to try to mix the exact color on the cut-out and extend that color out to the edges of their board. I also said they, as artists, might choose to leave some sections white. 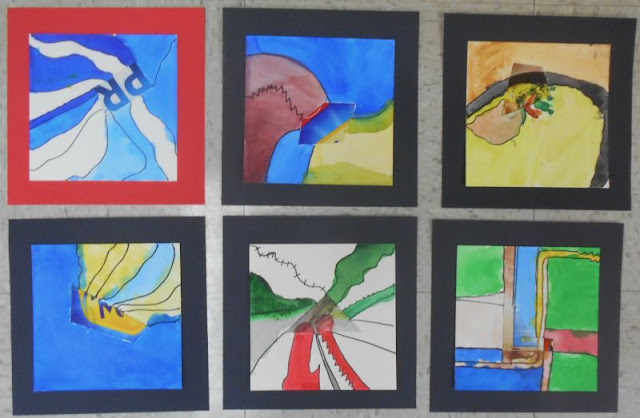 You can see in the first painting in the above photo how this student worked to achieve the variations of blue. These were done by 2nd graders and the concept of making tints using more water instead of adding white was a new skill for many!! 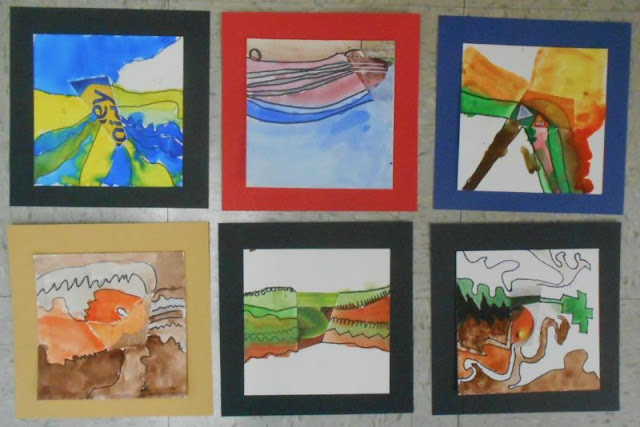 I love the graphic variety in these little gems!! I also told the kids that one of the reasons we were doing them now, was to remind them that they could easily do pictures like these at home during the summer using recycled cut-outs to start them out.

This is one of those absolutely "no fail" projects where everyone is successful. I think they did a GREAT job -- as I look at the photos above I am having a hard time finding some of the camouflaged shapes and I know where they are!!!! 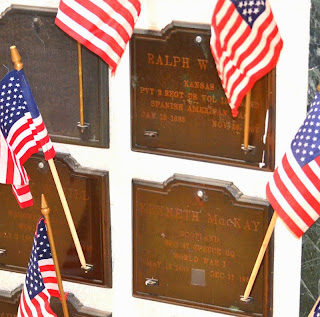 Posted by Christie - Fine Lines at 8:10 AM No comments: